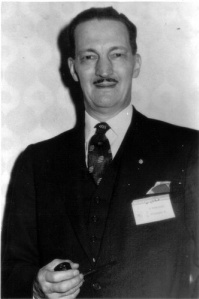 Henry Beam Piper (March 23, 1904 – circa  November 6, 1964) was an American SF writer, best known for the series Paratime (which is about exploiting The Multiverse for fun and profit); the Terrohuman Future History, or TFH, which is about the human race spreading throughout the stars, and the cultural rising and falling that happens as a result; and Little Fuzzy, an arc within the TFH series about the discovery of intelligent life on a settled planet.

A two-level real-life case of an Embarrassing First Name — Piper told people he went by the initial because he didn't like the name Horace; his actual first name was Henry.

He shot himself in 1964 because of financial problems. A check was literally in the mail.

Tropes found in his works include: