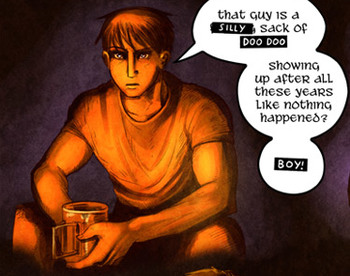 Ralphie Parker: Oh... f-u-u-u-d-g-e...
Adult Ralphie: (voiceover) Only I didn't say fudge. I said the word. The big one. The queen mother of dirty words. The "F-dash-dash-dash" word.
— A Christmas Story
Advertisement:

So, you're writing a book, and one of your characters, for whatever reason, has to swear. Not a problem - unless your intended audience are children or people who are generally against swearing. Is the risk of offending them worth the artistic reward of using exactly the right word? What can you do?

Easy: Just say that the character swore, without going into exactly what they said.

There are several ways to go about this. One way is to use direct dialogue, with a note that the offensive word the character "really" used has been replaced with something tamer; e.g.:

"Do you want me to send the whole blasted army after you?" he snarled. Only "blasted" was not the word he used.

This has the advantage of capturing more of the character's content and phrasing, but only a Lemony Narrator or a fairly intrusive first-person storyteller can get away with it.

Another way is to use indirect dialogue, more or less avoiding actual details; e.g.:

Carruthers cursed under his breath.

It can also overlap easily with Expospeak Gag, like so:

This trope shows up in Real Life, as well, as the source of common phrases like "Bob told Alice where to go",note In some English-speaking countries, anyway and "Alice told Bob where he could stick it."

Note that both versions involve the character actually swearing, and the narrator substituting less offensive language. That is what separates this trope from Unusual Euphemism, Curse of the Ancients, and Gosh Dang It to Heck!, in which the characters themselves use less offensive words rather than swearing. A combination of the two is occasionally used in which a character paraphrases an insult in-universe, as in:

Advertisement:
"She told you to go away. Except... she didn't put it so politely."

Compare Mouthing the Profanity. See also Foreign Cuss Word and Pardon My Klingon, in which actual swearing is portrayed, but is incomprehensible and therefore inoffensive to the reader. Compare Symbol Swearing. Tactful Translation is when a translator invokes this to avoid offending someone. Also note that this is chiefly a Literature trope. Sound-Effect Bleep and Curse Cut Short are rough audiovisual media equivalents, whereas T-Word Euphemism is often used for print. Contrast Spice Up the Subtitles or Unusual Dysphemism, which are cases where swear words are used as substitution for something comparatively tame. Not to be confused with Bowdlerization, which is when the original work isn't censored like this, but the edited work is.

Adult Ralphie censors his child self with "Fudge".

Adult Ralphie censors his child self with "Fudge".