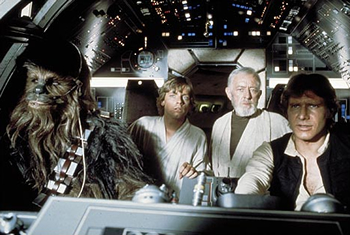 One of these characters is not like the others. Wait, what's that old guy doing in the back?
Azetbur: The Federation is no more than a homo sapiens only club.
General Chang: [to Spock] Present company excepted, of course.
— Star Trek VI: The Undiscovered Country
Advertisement:

When a work has an ordinary setting, your cast is going to be... well, ordinary. Your basic Five-Man Band, maybe with a Token Minority, or a Token Girl.

But when you're the author of Speculative Fiction, authors can make the cast as interesting as they want. Enter the Token Nonhuman to spice things up. He (or she; this is a Unisex Trope) could be a Rubber-Forehead Alien, a Robot Buddy, a Funny Animal, a Civilized Animal, a Partially Civilized Animal, or all of the above at once, but one thing is for sure. They aren't human.

Even Demi Humans like elves can count as examples of this trope.

Unlike other token what-have-yous, a token nonhuman is not there to attract a Periphery Demographic. Probably. A Token Nonhuman instead serves the purpose of exploring the possibility of other species with radically different natures from our own, incorporating beings with cool superhuman abilities, showing that the main cast is not practicing Fantastic Racism, and exploring the question What Measure Is A Nonhuman. If nothing else, the Token Non-Human can serve as the Amusing Alien for comic relief.

Because Most Writers Are Human (to our knowledge), you'll likely not see more than one protagonist who isn't human, hence the "Token" part of "Token Nonhuman". In live-action works, this is often a matter of budget and practicality; human characters can be portrayed with human actors in regular outfits, whereas non-humans require elaborate costumes and/or special effects to depict them (unless they're Human Aliens). If there is more than one nonhuman character, you'll most likely see a cast full of nonhumans, with a Token Human.