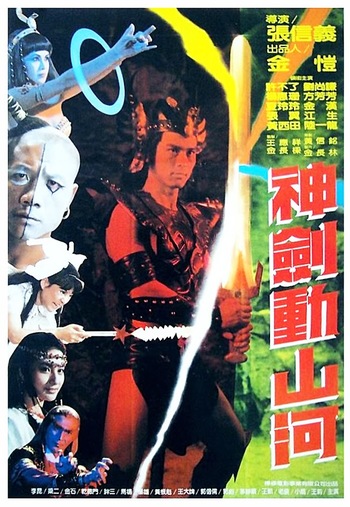 This Sword is made for Thrilling.
Advertisement:

A princess is born of magic when a meteorite enters the queen's womb during the night of birth. Believing the princess to be cursed, the king then orders to have her set adrift down a river, where she is then discovered by a group of dwarves who raised her to adulthood. 17 years later, the Princess fell in love with a prince who then takes her back to his kingdom, just as the king's evil advisor, who worships a demon in exchange for sorcery powers, plots to usurp the throne. There's also a cyclops, a nine-headed dragon, a group of living statues, a fairy, a genie in a silver box, and the talking skeleton of a deceased warrior whom the prince must seek for advice during his adventure.

Nope, this movie doesn't make any attempt to explain any of these.

The Thrilling Sword is a 1981 Taiwanese Heroic Fantasy film directed by Cheung San-Yee. Made during the boom of fantasy films in the early 1980s, the film combines elements from Snow White, classic Wuxia, wireworks and high-flying action from Shaw Brothers (appropriately enough, the film's villain is portrayed by Shaw Brothers alumni Chang Yi, during that part of his career where he started taking antagonistic roles) with enough random plot twists and Mind Screw to make audiences question their sanity. Accompanied by trippy-as-hell visual effects (due to the film's limited budget and slapping everything together in the last minute in an attempt to cash in on the 80s fantasy craze), the movie...