Literature / Shadows of the Empire 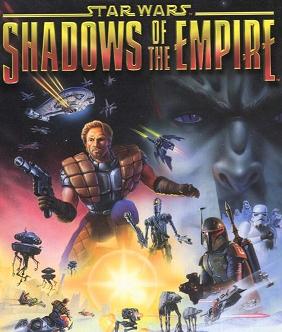 It is a time of crisis. Imperial
probes, scouring the galaxy for
the hidden Rebel base, have
discovered their outpost on the
remote ice world of Hoth.

Darth Vader, obsessed with
finding Luke Skywalker, has
sent his forces to engage
the Rebels in battle.

With the dreaded Imperial,
fleet approaching, a lone
freighter has entered the Hoth
system...
Advertisement:

Shadows of the Empire

is an entry in the Star Wars Legends, coming out in 1996. Conceived as an interquel between The Empire Strikes Back and Return of the Jedi, it's a multimedia project, like The Force Unleashed after it, designed to have all of the media that would surround a new movie without actually making a movie.note It's speculated that this project was constructed as a marketing "dry run" for the then-upcoming prequels, testing the responsiveness of the consumer base to the revival of the decade-dormant Star Wars IP. There is a novel (with an accompanying junior novelization), a video game, a role-playing game, a six-issue comic

, a toyline, trading cards, and a Making Of book. Not all its elements overlap—to get the full story, readers would have to see each story-related component.

The novel is the centerpiece of the project and tells the overall story, focusing on the main characters. The comic book series has generally the same focus, but includes interludes to bounty hunter Boba Fett's battle to keep possession of the frozen Han Solo, and the antics of Wrenga Jixton, a spy sent by Darth Vader, as he infiltrates Jabba's swoop gang and ensures they are unable to kill Luke Skywalker. The video game allows players to control new character Dash Rendar, whose adventures in the game weave in and out of the overall storyline.

Throughout each of these, Prince Xizor, the head of the criminal organization Black Sun, finds out why Darth Vader, his bitter rival for the Emperor's favor, wants the Rebel hero Luke Skywalker. In order to gain the Emperor's favor and punish Vader for killing Xizor's family, Xizor plans to kill Luke, while the Rebels try to find Han.

Not related to the Video Game Shadow Empire.

Shadows of the Empire provides examples of:

Alternative Title(s): Shadows Of The Empire