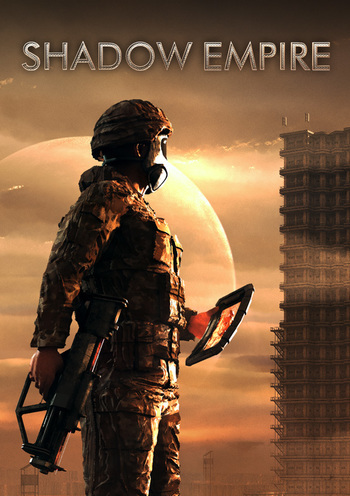 In the grim darkness of the far future, there is only logistics.
Advertisement:

Shadow Empire is a complex science-fiction Turn-Based Strategy game that was developed by VR Designs and released in 2020.

The year is 8200 CE, centuries after the collapse of galactic civilization, and you are the leader of a small city-state on a hostile, forgotten planet. For you, a return to the stars is too lofty a dream. Your only goal is to dominate your ruined world by any means necessary, unifying its (remaining) people under a single regime.

Of course, your rival regimes - ranging from resurgent major regimes like your own to minor regimes of raiders, slavers, mutant barbarians, xenomorph-like arachnids, religious fanatics, and remnant killbots - aren't going to just hand the planet to you.

Besides the complexity and logistics you might expect from a hex-based planetary conquest game, Shadow Empire brings three main innovations to the table: a detailed planet generation system inspired by actual astrophysics (which can generate anything from airless moons to lava hellscapes to irradiated death worlds to biohazard jungle planets infested with ravenous alien megafauna); the stratagem card system which turns your administration into something of a deck-building game; and extensive RPG Elements that include not only every governor, council director, advisor, and military leader in your regime, but your regime itself, with your decisions and policies contributing to a "regime profile" of values - and the more extreme you can go in one direction, the more powerful perks you'll unlock for your regime.

In practice, this leads to all kinds of emergent chaos spicing up what was once your simple plan to conquer a planet. Every turn, you have to make decisions about events in your empire and about issues that your various councilors need resolved. You might end up committing to a decision that you don't like just to keep your most powerful leaders happy. You might inadvertently cause a famine or economic downturn in a zone when you nationalize the only farm or oil deposit to supply your army, leaving your civilian population nowhere to buy food or fuel for themselves. You might end up being dragged into a war when a neighboring regime asks for your help in rooting out dissidents who have fled to your zone, and you refuse because complying would increase your regime's Autocracy value, which would negatively impact its Meritocracy value, which you don't want because you're grinding Meritocracy perks.

In short, it's Panzer General meets King of Dragon Pass meets Aurora (4X). Nothing to do with the Star Wars book Shadows of the Empire or the Video Game based on it.