You Have Researched Breathing 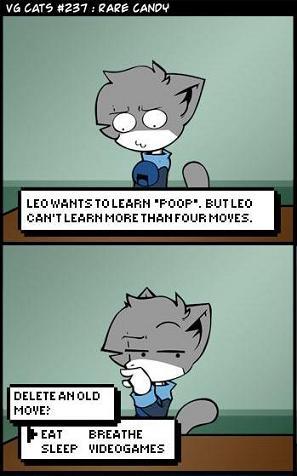 Guess which one he chooses...

"Milk is the one substance all mammals can consume immediately after birth. But some madman at Blizzard is either unfamiliar with the stuff or has confused "milk" with "Jack Daniels Old Time Tennessee Whiskey," because you have to be a seasoned adventurer before you're allowed a glass of it [...] Things only get more demented as you go up in level. You need a Ph.D. in Kicking Ass to slurp down a bowl of soup, and you'll need to be more than halfway to godhood before you're allowed to face the challenge and responsibility of eating pie."
— Shamus Young, "Vulture Milk"

An ability that in-universe should be immediate and effortless is treated as a complex feat that needs to be explicitly mastered.

Suppose you're playing some Real-Time Strategy game such as Age of Dunecraft. Your Deadly Deathknights of Death can shoot fast-moving vehicles with their missiles, but attacking buildings or infantry with the things simply doesn't occur to them yet. Sigh. You totally thought you taught that ability.

Some building time and resources later, you have researched breathing.

It's bad enough when you have to upgrade weapons and acquire new tech rather than start with all of it (especially if you researched it already last week). But if You Have Researched Breathing, then you are using optional upgrades for things that shouldn't need to be researched, that shouldn't even be on the Tech Tree in the first place: it should be second nature to that sort of unit. And yet, somehow, it isn't.

Also prone to happen in any other type of game with character customization or unlockables, such as Role-Playing Games. Yes, you can't wear boots or drink potions until you grind enough XP to level up.

Can overlap with Ability Required to Proceed. Compare with Level-Locked Loot. The corollary is often Instant Expert, where Researching Breathing automatically allows those who Breathe to do so instantly and flawlessly. The character may also be subject to a Limited Move Arsenal, where they need to forget something in order to learn something else. If it's an actual skill, but something the character should know how to do already (like a veteran soldier learning how to use grenades), that's Overrated and Underleveled.