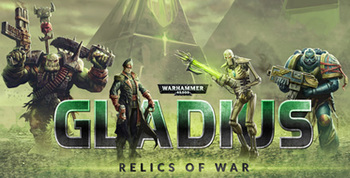 Not pictured: The scorpions the size of trains. Welcome to Hell!
Gladius Prime was known to Imperial scholars as a planet of archeological interest. During its colonization ancient relics were found, revealing hints of a shrouded past. But it was more than relics. Something awakened, an unspeakable horror from an ancient past, and the citizens of Gladius found themselves trapped in a terrible war for survival.
Advertisement:
Gladius Prime was once a planet of peace. Now there is only war.