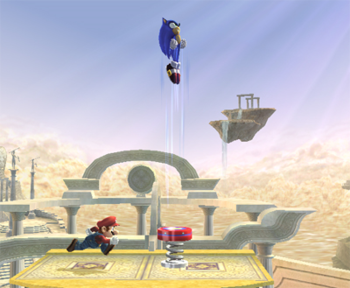 The Spring Jump is an ability in video games that sends your character rocketing straight upwards, and is much more powerful than your character's normal jump, giving you the power to leap tall obstacles In a Single Bound. It may require a special item or only be available at certain places in the level architecture (such as springboards and Spring Coils), or some other limiter that makes it less available (which it does not imply the availability of, though some degree of air control is required).

Occasionally, it will be an integrated part of the character's abilities, but will usually be limited by being somewhat complicated to perform, requiring the player to stand still, and/or giving up what it gains in height in horizontal distance (thus making it only good for clearing obstacles, and not at all for crossing gaps).