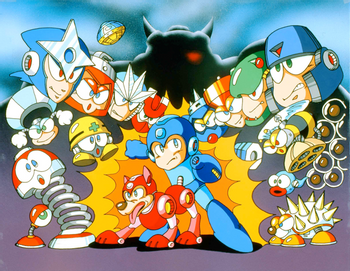 After the runaway success of Mega Man 2, Capcom realized they had a hit franchise on their hands, and it was only natural for them to soon follow up with Mega Man 3 (Rockman 3: The End of Dr. Wily!? in Japanese) in 1990.

The story is centered some time after Mega Man 2; Dr. Wily seemingly manages to reform after his previous two defeats, and is now working alongside Dr. Light to build a peacekeeping robot called Gamma. However, the Robot Masters they developed together go berserk and start wreaking havoc, stealing the Energy Elements they were in charge of mining on eight uncharted planets. Naturally, Mega Man is sent off to stop the rogue robots, this time with the help of his new canine companion, Rush! Along his journey, he encounters a mysterious being called Break Man, who keeps fighting him, as if to test him...

Eventually, it turns out Dr. Wily was behind the whole scheme, tricking Mega Man into a wild goose chase so he could steal Gamma once it was finished and use it for his own evil ends. After a climatic battle, Gamma is destroyed and Wily surrenders again...only for both him and Mega Man to be crushed under the rubble of his collapsing castle. Fortunately, Mega Man is rescued by Break Man, who drops him off at Dr. Light's lab and hastily departs. Dr. Light reveals to Mega Man that Break Man's real identity is Proto Man, who (in info only shown to the audiencenote on the other hand, Dr. Light could have just told him at some point) is Mega Man's long lost, aloof older brother. Also... A certain blue UFO flies away, its inhabitant alive and well, and plotting his next scheme...

All in all, Mega Man 3 was another hit in the series, selling over a million copies and receiving excellent critical reception, although not quite on par with 2. The refined gameplay of 2 was expanded upon further, with the "Items" turned into the far more flexible Rush vehicles, a much higher limit on how many E-Tanks you could carry (9 instead of 4), and a new slide move. On top of that, 3 is the longest game in the entire NES Mega Man series, with a whopping 18 stages total! Unfortunately, Keiji Inafune claimed that 3 was his least favorite Mega Man game, due to the strained development of the game keeping it from reaching its full potential in his eyes, as well as losing the simplicity of the previous two games.

As with Mega Man and Mega Man 2, 3 would later receive a 16-bit upgrade as part of the Europe and Japan-only Mega Man: The Wily Wars / Rockman Megaworld cartridge for the Sega Genesis note Aside from being a Sega Channel exclusive for a brief time, and an eventual local release as a bundle with other Sega games in the Sega Genesis Ultimate Portable Player — but without the save feature and extra Wily Tower game. It would also receive a Japan-only PS1 re-release as Rockman 3: Complete Works, complete with remixed music and bonus content. The game would eventually get a major re-release as part of Anniversary Collection for PS2, Nintendo GameCube, and Xbox, and it is now available on Virtual Console and as part of Mega Man Legacy Collection.