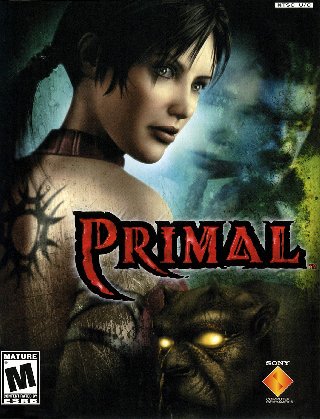 Perky Goth Jen and her gargoyle companion Scree battle through four elemental realms to restore balance between Order and Chaos. Along the way Jen gains the ability to transform into four demonic forms. Pretty Tropetastic for a single game not in an already established universe.

A British counterpart to ICO, Primal is as much or more about experiencing the game's universe and interaction between characters as it is about gameplay. Sometimes it's like a luxuriously animated old-school text adventure. In contrast to ICO's minimalist approach, Primal spared no expense in its presentation production values. Motion capture, BAFTA nominated soundtrack, machine band combat soundtrack, lavish object and character models, luxurious textures, top-quality voice acting, richly imagined worlds, cultures and races, realistic characters with sometimes extravagant amounts of dialog.

Developed by SCEE Cambridge, the development team responsible for MediEvil and MediEvil 2, Primal (2003) is a PS2 exclusive. It is a single player, two character action/adventure game focusing on Jen, a mortal girl attacked when leaving a nightclub with her boyfriend Lewis, singer in the club's band.

The attack leaves Jen and Lewis unconscious in a hospital. A short, dark figure approaches Jen's bed and raises her spirit up out of her body. The figure reveals itself to be a small stone gargoyle named Scree. Scree explains that Jen's body is close to death and she must come with him to the Nexus.

The player can control either Jen or Scree, an animated stone gargoyle, as they travel through four fantastic realms to restore the balance between Order, represented by Lady Arella, and Chaos, represented by Abaddon.

Jen's Elemental forms are healed by drawing elemental energy from Scree that only he can collect. Her human form is weakest, but regenerates naturally after a short time of not being hit.

Not to be confused with the Genndy Tartakovsky series, Primal (2019), or the 2019 Nicolas Cage film Primal.