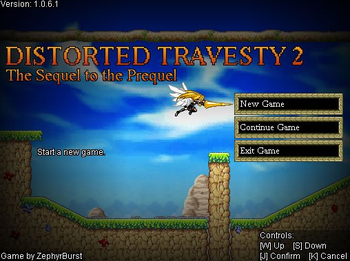 Distorted Travesty is a "Fast Paced Satirical Action Platformer" made in Game Maker by Dark Yoshi (aka. Zephyr Burst). It follows the story of two gamers with no clear goals in life. These two are Jerry, the most hardcore of hardcore gamers, and Jeremy, who partakes in some light hacking and playing jokes. You control Jerry, while Jeremy sits on the fourth wall and gives you aid throughout the game.
Advertisement:

One day, when they break into the Integrated Electronics Factory to teach its CEO about the greatness of Jerry's favorite game, a mysterious entity known as The Darkness comes and steals him away to another world, one which is composed of all the games the two have played since their youth. Their only hope of returning home is to collect the Seven Magical Flavored Muffins throughout the world and use them to defeat The Darkness once and for all, lest they miss a new episode of the best series ever. The game was completed on November 5, 2010.

A short sequel, Distorted Travesty 2: The Sequel To The Prequel was released on April 7, 2011, and can be downloaded from the same site. In it, you play as Claire, Jerry's ex. Both Jerry and Jeremy make appearances in the game as well.

A third entry in the series, Distorted Travesty 3: Saved Game, was released on October 6th, 2015. This entry in the series revolves around Jerry and Claire, chronicling their struggle to save the world against the threat introduced in the last game. Jeremy and his sister, Chao, return to provide help, guidance and (in Jeremy's case) snarky comments.

Tropes provided in the sequel: