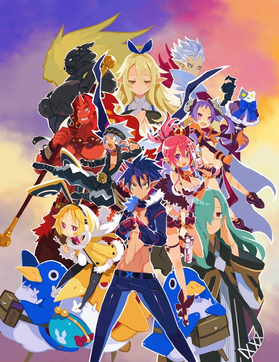 A Netherworld crisis of extinction-level proportions was perpetrated by the Demon Emperor, Void Dark-
The historians of later generations look back in puzzlement at this historical event, the largest Netherworld war, which erupted and expanded in a flash, and ended in just one night.
Some call it the War with No Victor, while others call it the War with No Hero. The truth of this event remains a mystery to this day...
—Opening Narration

Disgaea 5: Alliance of Vengeance is the sixth game in the wacky Turn-Based Strategy series Disgaea, the work of Nippon Ichi. It is Nippon Ichi's first game for the PlayStation 4.

A powerful and evil Overlord named Void Dark is conquering Netherworlds with The Lost, his army of ten billion. A group of Overlords from conquered Netherworlds have decided that enough is enough, and rise against Void Dark to take vengeance. The story revolves around Killia, a young demon that seeks revenge against Void Dark. Joining him on his path of vengeance is Seraphina, the Princess Overlord of Gorgeous who ran away from home to avoid an Arranged Marriage. The protagonists must travel to different Netherworlds to recruit Overlords and build an army against Void Dark.

This games features numerous new features not seen in previous Disgaea games. Resistance and affiliation statistics for units on the battlefield can be seen when units are highlighted. There is also a revenge system that activates when party members are defeated. Several new units are introduced in Disgaea 5: the Dark Knight, Maid, Pirate, Sage, Wrestler, Fairy, Nine-Tailed, Chimera, Imp, Grizzly, Rabbit Fighter, Two-Headed Dragon and Cavalier.

"...Huh!? I'm sorry. I was thinking about the effects that browsing TV Tropes Wiki has on productivity in the workplace and academia, plip."
Feedback

Flonne's recurring "Flonnezilla" technique has her attack her enemies while wearing a costume modeled after the King of Monsters. From Disgaea D2 onwards, it also includes her rampaging around a diorama city.

Flonne's recurring "Flonnezilla" technique has her attack her enemies while wearing a costume modeled after the King of Monsters. From Disgaea D2 onwards, it also includes her rampaging around a diorama city.