What the Hell, Player? 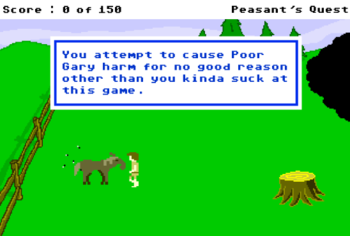 Ooooh. You got burned.
"You coldly cut open an artery. To even the most skilled physician, it would appear as though Timebomb died of his wounds. You bastard."
— Context Message, Fallout 3
Advertisement:

A combination of Easter Egg and You Bastard!, this occurs when a player does something strange or unusual. They may attack a friendly NPC, try to go Off the Rails, abuse Combinatorial Explosion, or do something Out of Character — an arachnophobic character approaching a spider's nest, for example. Or maybe just demanding a little too much attention. Another character — or the game itself — then calls the player out on their peculiar behavior, noting that it's particularly cruel, strange, perverted, or funny. They stand up and ask: "What the Hell, Player?" The calling out is inconsequential unless otherwise programmed (e.g. Outcast, where if you act needlessly violent, the Non Player Characters refuse to interact with you). Some games will use this as an alternative to Friendly Fireproofing; allies will shrug off a certain amount of damage with just a stern warning to watch your aim, but cross the line and they'll turn hostile.

Very common in Interactive Fiction, where attempting to Get Ye Flask will frequently elicit such a remark.

Hostage Spirit Link may be a subtrope, depending on how you look at it. Shoplift and Die is another common subtrope. Frequently a result of Video Game Cruelty Potential. If taken to extremes, results in Video Game Cruelty Punishment and possibly a Non-Standard Game Over. Closely related to What the Hell, Hero?, and is (usually) a subtrope of Developers' Foresight. If the player is rebuked for doing something despite the fact that they have no choice, it's Blamed for Being Railroaded. See also Addressing the Player.