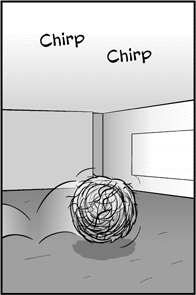 Given that it's indoors, that is some VERY determined tumbleweed.
"When I get my hands on that cricket, it's snack time!"
— Beetlejuice, Beetlejuice (Beetlejuice!)
Advertisement:

A character says or does something intended to elicit an enthusiastic response from a group watching him, such as the audience in a theatre or a band of comrades. But instead of the reaction he expects, he hears nothing but the sound of crickets chirping, suggesting that nobody is responding, and they may, in fact, be stunned into silence, completely baffled, or missing altogether. A Flat "What" may follow.

Occasionally visually accompanied by tumbleweed blowing past, in which case the crickets can sometimes be replaced by blowing wind, or a wolf howling in the distance, with perhaps a distant bonging church bell. Sometimes the sequence includes microphone feedback. Sometimes a single person will cough. Basically, it's what happens when the script calls for silence but needs an audio cue to indicate the silence.

Alternatively, someone might throw a tomato at him. Or an awkward Rimshot may play.

In anime, this trope may be represented not by insects but by birds flying by (such as the Idiot Crows). Of course, birds can also have other symbolic meanings so don't be too quick to apply this to every appearance. More often than not, it's coupled with a Sweat Drop.