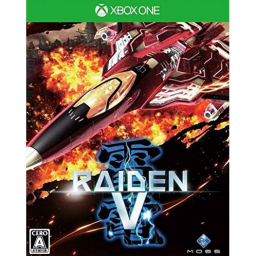 The new RAIDEN of the story is now beginning.
Raiden V is the sixthnote Raiden DX was released in 1994 after Raiden II's release in 1993, making DX the third game. Raiden III was released in 2005 as the fourth game in the series and so on. Ninth if you count Raiden Fighters entries. game in the Long Runner Shoot 'em Up Raiden series by Seibu Kaihatsu, published by MOSS, following up Raiden IV released 9 years earlier in 2007. It was first released on Xbox One in February and May 2016 in Japan and North America respectively, coinciding with the Raiden series' 25th anniversary, and was later released as Raiden V: Director's Cut for PlayStation 4 and PC (via Steam) on October 10, 2017 and the Nintendo Switch on July 25, 2019. The Switch release marks the first time a Raiden game was released on a Nintendo console since Raiden Trad on the Super Nintendo Entertainment System in 1992.

Unlike the previous games, Raiden V has an extensive story, detailing the Fighting Thunder project (which created the Raiden ship), the crystal-based enemies, and more. The events of this game take place 17 years after humanity's war with the Crystals began. Taking a cue from Raiden Fighters Jet, there is a non-linear stage progression system in which players advance to different stages depending on fulfilling certain objectives on previous stages.

Each stage after the first has multiple versions, with stage 2 having two versions and stages 3 through 8 having four. The gameplay in each of those stages remains unchanged, but the story changes in each version of the stages.