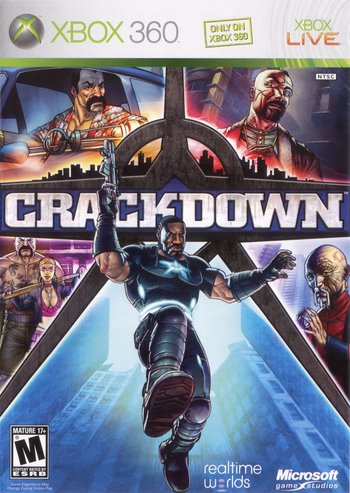 Skills for kills, Agent... skills for kills
"You are authorized to use whatever means you feel is necessary to remove the filth from the streets."
— The Director
Advertisement:

An open world, third-person shooter video game for the Xbox 360, Crackdown was for a time, famous for being the game you had to buy in order to get into the Halo 3 beta.

The game takes place in the fictional metropolis of Pacific City, whose several districts and areas are divided among four islands. The city is controlled by three crime organizations: Los Muertos, of Central American origin; an Eastern European gang, the Volk; and the formerly above-the-books Shai-Gen Corporation, from East Asia. Normally, a police-like organization called the Peacekeepers kept the city under control; their forces, however, were overwhelmed by the sudden rise in crime.

The city, therefore, sought additional help from "the Agency," an organization that, in addition to outfitting and supporting Peacekeepers, has used advanced surgical and cybernetic technology to create Super Soldiers known as "Agents." The Agency is based out of a former hotel in the very center of the city. The player takes on the role of one of their Agents, and is tasked with systematically bringing down all three organized gangs, while keeping both the populace and Peacekeepers safe. The Agent's actions are continuously monitored by the Agency, and its Director (voiced by Michael McConnohie) provides continuous reports to him of his progress.

Crackdown was met with positive reviews. What was particularly liked was how your Agent levelled up. The Agent's five abilities, agility, firearms, strength, explosives, and driving, increase in power when you use them and unlock more cool stuff for you to use. For instance if you beat up a bunch of people you eventually get stronger and can lift heavy objects, or if you perform well in driving missions you get cooler cars. The ability people enjoyed most though was agility, which you filled up by collecting orbs on rooftops that made you faster and jump higher. So by the end of the game you go from a regular guy to a super cop who jumps effortlessly from rooftop to rooftop. And goddamn was it addictive collecting those orbs and jumping around.

The sequel was released on July 6th, 2010. Ten years have passed since the last game and the Agency faces two new problems. CELL is an anti-Agency group armed to the teeth that has taken over parts of Pacific City that attacks during the day. At night the streets are filled with hundreds of fast zombies called "Freaks" that attack everything. A new Agent has to take back the parts of the city controlled by CELL during the day, and clean out the Freak nests at night with the help of a new weapon called Project Sunburst.

Crackdown 2 was not as well liked as its predecessor. Everyone was upset that the game took place in an exact copy of Pacific City from the first game, except the city was rundown instead of bright and vibrant. And the fun Storming the Castle missions were replaced with repetitive king of the hill games. Plus, fighting members of La Résistance with legitimate complaints was just not the same as taking out gangmembers, nor was killing zombies that you could eliminate with a single punch.

Crackdown 3 was made by Sumo Digital for Xbox One and Windows, released in February 15, 2019. See that page for more details.

Not to be confused with the 1989 arcade game Crack Down by Sega.

This game series contains examples of the following: