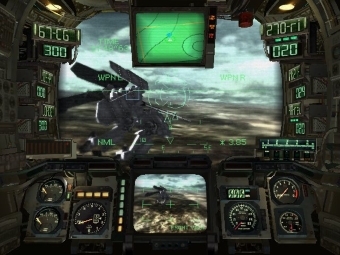 Every button on your $200 controller

◊ affects something in the cockpit.
Advertisement:

A diegetic interface is when a game's interface elements exist In-Universe; the Player Character sees them, rather than just the player ("Diegetic" meaning "within the narrative", such as diegetic music). This is generally handled in one of two ways. Sometimes the normal player HUD is explained as being part of the character's equipment — common if he's robotic, a cyborg, or wearing Powered Armor, and justified if the game is in first-person perspective. Other times, the game simply uses in-game indications of things that a HUD would normally tell you; a wounded character will limp instead of having a Life Meter, for example.

Vehicle simulators call this a virtual cockpit, and it tends to be the most detailed and realistic interface mode short of a hardware sim with actual panels. In these cases, a 2-D control panel laid out for easier reading without scrolling is usually included as an easier-to-program option.

Generally, this is done in order to increase immersion and enhance Willing Suspension of Disbelief; it's much easier to believe that your character is a real person in a real situation when the screen isn't cluttered with inexplicable icons representing health and ammo. In some cases, this also leads to an aversion of Menu Time Lockout: browsing your inventory may leave the player open to attack, instead of pausing the action mid-battle while you apply a handy medkit.

It also helps that drawing the interface all the time can reduce the screen area that needs to be drawn using the more expensive world rendering.

Robo Cam is when one is applied to a character's view outside of video games. Justified Save Point is related. May justify Interface Screw as well. See also Painting the Medium, where this is temporarily invoked for the sake of Postmodernism, and usually Played for Laughs.