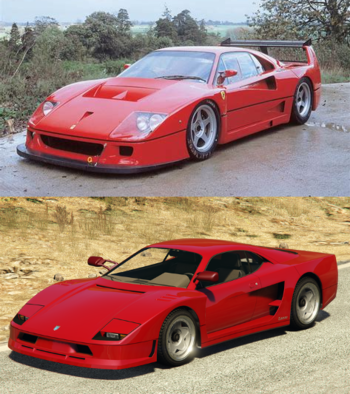 You'd be hard-pressed to tell that they didn't base it on any real life vehicle.note Above: a Ferarri F40 LM. Below: A Grotti Turismo Classic from Grand Theft Auto V
Vanoss: It's a McLaren.
Wildcat: It's not a McLaren, they can't say it's that for copyright reasons... it's a McLarry!
— Vanoss and Wildcat talking about the Progen T20

So you wanted an exotic supercar in that Wide-Open Sandbox Murder Simulator you're developing, but there's this negative reaction from car manufacturers if you attempt to acquire a licence for said vehicle. Ferrari is particularly notorious for disallowing companies, or even owners themselves, from putting their cars in a potentially negative or unflattering light; case in point, Ferrari sent a cease-and-desist letter to deadmau5 for violating their trademark with "Purrari" badges. What are you going to do then? Simple: make a car that's similar to the real life vehicle in some way, but is still distinct from the car in question. In theory, this can save developers the trouble of having to pay for either royalties or lawsuits over the use of a licenced vehicle, though it is understandable that some may be put off with the lack of vehicles from actual manufacturers.

This practice of debadging

tends to be applied in works of fiction in general, especially if paying royalties to car companies is a concern. Commercials or films may elect to debadge a car either to dodge royalties, to avoid implying that the producers are endorsing a particular automobile brand unless they are paid to do so, or to keep the car manufacturer from being portrayed in a negative light. This is largely avoided, however, due to the de minimis rule in that depictions of trademarked objects like cars are considered to be incidental unless the particular car model is the subject of the work, e.g. it would be frivolous for Toyota to sue a production company merely for its use of a Corolla as an incidental object used by the characters in a show, but that would be a different story if the Corolla nameplate itself is the subject, like a Transformers character in the form of a Corolla sedan or something along those lines.

Another benefit, as far as royalties and licensing are concerned, is the fact that video game developers or film studios are free to distribute their work for as long as they see fit without worrying over paying an automotive manufacturer the rights to use the vehicles. This is why some racing games end up getting discontinued or do not see a re-release, which can be avoided with faux cars.

Keep in mind that this applies to fictional vehicles bearing a heavy or at least significant resemblance to cars or trucks in the real world, and as such may not apply to ones that are completely made up.

A subtrope of Bland-Name Product, in this case specific to automobiles and other forms of transport. Compare with Shoddy Knockoff Product, for vehicles in Real Life that look suspiciously like a well-known car, e.g. the Chery QQ

being an analogue of Chevrolet's Spark down to its dimensions.note Save for the different fascia that is. Also compare with Product Displacement. Contrast with Product Placement, if real vehicles are used in a work. See also A.K.A.-47 and iPhony for firearms and Apple hardware lookalikes, respectively.