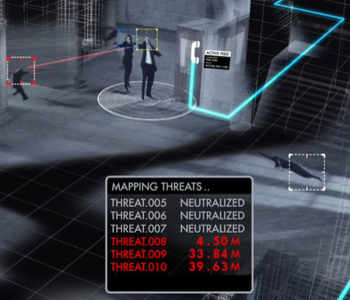 Augmented Reality refers to any system that overlays virtual objects or information on top of or beside images from the real world.

Distinguished from a Heads-Up Display in that the information in a HUD is presented as being on the surface it's projected on, whereas Augmented Reality is usually presented as "actually" being part of the world behind it. It's pretty much the epitome Real Life example of Goggles Do Something Unusual.

Compare to The Metaverse, which may appear similarly depending on how its used.

See also Stat-O-Vision and Robo Cam, which is how this is often used in fiction.