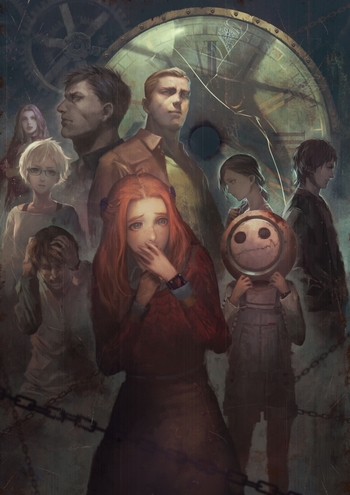 Zero Time Dilemma is a Visual Novel for the Nintendo 3DS, PlayStation Vita, and PC, the sequel to Virtue's Last Reward and the third and final chapter of the Zero Escape series. After a viral marketing campaign involving a website made by English localization company Aksys Games, it was officially announced at Anime Expo 2015 for a Summer 2016 release, with the release date confirmed at GDC 2016 to be June 28, 2016 in North America and Europe, and June 30, 2016 in Japan.

On New Year's Eve 2028, nine people awaken trapped inside a strange facility and are forced to take part in something called the "Decision Game". The only path to escape is locked by six passwords, and each password will only be revealed when one of the nine dies. What's more, the nine prisoners are equipped with watches that will erase their memories every ninety minutes.

Split into teams of three, the nine characters must work together and against each other if they hope to see freedom. But this is no mere death game: human civilization is destined to fall at the hands of an oncoming disaster, and an elaborate Time Travel gambit has been set in motion to Set Right What Once Went Wrong. The "Decision" made within the facility will not only determine the future of the nine captives, but six billion inhabitants of Earth.

Like any other game in this series, this game is filled to the brim with spoilers, especially since its plot continues from where the end of Virtue's Last Reward left off. As such, the probability that you will be spoiled by reading on any further is high. Consider yourself warned.

SEEK A WAY OUT!