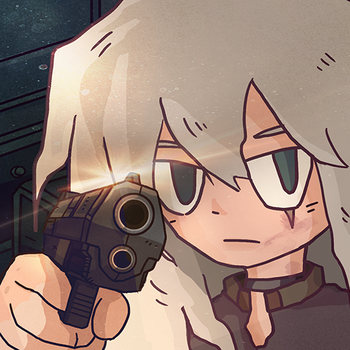 Kirell is about to shoot you
Advertisement:

Young, white-haired protagonist Kirell wakes up in a room and realizes she has lost her memory. Before she can come to terms with this information, a mysterious man who calls himself Charon appears and tells Kirell that she has died, and she has 7 days to accomplish a certain task. If she does, she will be resurrected. But she has to be careful, as there are others, with their own tasks, that might either help her or get in the way.

Kirell's task is to get herself to a certain location with the help of a broken compass that only works when some other lost soul dies nearby. This means that in order to be resurrected, Kirell has to kill... or, at least, stay close to someone who does.

7 Days: Decide your Story is a short Android Visual Novel by Buff Studio, which can be purchased here.