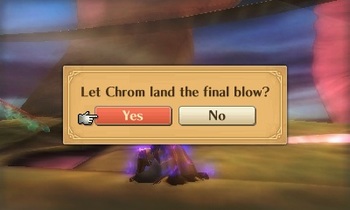 "I am the last Pillar. The only survivor of the Circle of Nine. At my whim, the world will be healed. ....Or damned. At my whim...."
— Kain, after killing the rest of the corrupted Pillar Guardians, and faced with the decision whether or not to sacrifice himself, Blood Omen: Legacy of Kain
Advertisement:

The Last-Second Ending Choice is a type of Golden Snitch that occurs near the climax of a Video Game, where a single choice made by the player determines the ending that they get, irrespective of the prior choices that they may have made during the game.

This becomes particularly awkward if the game uses a Karma Meter, which is generally intended to track and rate the player's progress throughout the game as a whole. As such, this can result in strange moments where a character who has spent the game playing to one side of the spectrum makes one choice that earns them an ending completely at odds with how they've previously been playing. This also means that the player does not need to go through the game again with a different character of a different alignment; just make a save before the important choice and they'll be able to see all the endings, killing the replay value that having Multiple Endings would normally give to a game.

A common variant sitting halfway between this trope and the game picking a specific ending for you based on the sum of your earlier choices (whether via a Choice-and-Consequence System or a Karma Meter) are the unlockable endings, where you still get to pick your ending at the eleventh hour, but which endings you can pick from depends on which Event Flags you managed to raise or which sidequests you did or did not do in the current playthrough. In this variation, you typically have at least two "freebie" endingsnote usually not the happiest ones, which are available no matter what you do, plus any number of additional endings you can unlock. If present, the Golden Ending and the True Bad Ending normally fall in that second category, as both require going an extra mile to unlock by definition.

Note, however, that this trope can be done well, like any other. Some stories have the nature and symbolism of choice as the main theme, or intentionally set this up as a Golden Snitch to convey a certain emotion, thought, or plot point to the player. Other games present the final choice as a culmination of a certain theme they have been exploring and ask the player to take a stance on it. If the player is given enough context beforehand, such a choice may be a very thought-provoking experience.

A Sub-Trope to Multiple Endings and a Sub-Trope to Story Branching. Compare One Judge to Rule Them All, a sibling among Snitches. Contrast Big First Choice, where the story-changing choice occurs near the beginning of the game and may not impact the ending.

While most of the in-game plot decisions the character can make have little impact on the story at large, after beating Lord Shimura in the duel at the end, the player is given two options; either kill Lord Shimura and give him the honorable samurai death he wants, or spare his life and allow the Shimura Clan to persevere without him.

While most of the in-game plot decisions the character can make have little impact on the story at large, after beating Lord Shimura in the duel at the end, the player is given two options; either kill Lord Shimura and give him the honorable samurai death he wants, or spare his life and allow the Shimura Clan to persevere without him.