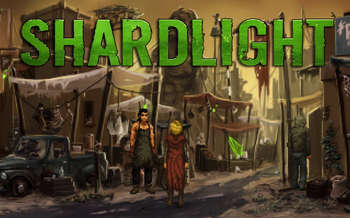 Shardlight is a post-apocalyptic point-and-click adventure game created by Wadjet Eye Games and released in 2016.
Advertisement:

World War III happened sometime in the early two thousands. When the bombs fell society as we know it was destroyed, and the few survivors eke out a bleak existence in the ruined remains of the old world's cities. Amy Wellard, a young girl who was barely five when the world ended, has a repair shop where she fixes vehicles and technological items with whatever still-usable junk she can find, but she starts feeling symptoms of Green Lung, a terrible sickness that's been infecting lots of people and has everybody scared witless. The Aristocracy is trying to deal with it by distributing a vaccine, but there isn't nearly enough to go around, so a daily lottery is held where people who have a ticket — given as compensation for government jobs — are given a chance at winning a dose.

Scared and resigned to doing dirty, difficult jobs for the government in the hope of surviving, Amy is assigned to fix one of the many reactors that power what's left of the city, but through an unexpected meeting she gets in touch with the Rebellion — determined to end the authoritarian rule of the Aristocracy and give justice back to the people — and the Acolytes of the Reaper, a cult with a literal dying wish. Needless to say, not everything is as clear-cut as it seems, and Amy's in for more than one shock...

In 2013, while the game was still in production, two of the developers, Ben Chandler and Francisco "Grundislav" Gonzalez, each released two playable teasers set in the Shardlight universe. The first one, titled The Rebirth, is essentially a prequel set Just Before the End (and even a bit during the end), following a government official and his assistant at an unusual day at work, while the second The Reaper is a short side-story more in tune with the game proper that follows a mechanic and his friend as they do some bird watching. Both can be found here