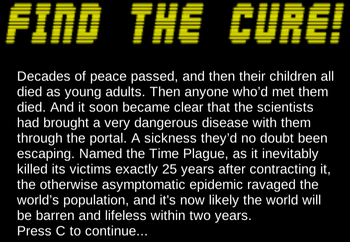 The stark premise.
Find the Cure!

is an in-browser text-based adventure game published on itch.io in January 2016. It tells the story of an unnamed traveler who passes through a wormhole seeking the cure to a deadly disease ravaging Earth.
Advertisement:

If you're looking for the trope, see Find the Cure!.