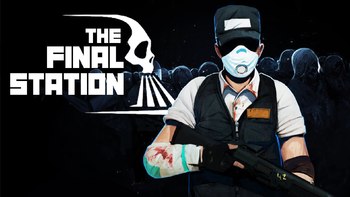 Drive the Locomotive Through a Dying World
"It must be great, to travel the railroad. Don't have to make any decisions, don't have to pick a route. Just maintain the speed, and maintain the train..."
— Arthur Vane
Advertisement:

The Final Station is an indie Survival Horror side-scroller, developed by Do My Best Games and published by tinyBuild. It was initially released on August 30, 2016 for PC and Xbox One, with a PlayStation 4 port releasing a few days later.

You are Edward Jones, a train conductor in a near-future society still reeling from "the Visitation," a devastating Alien Invasion that occurred 106 years ago. On a routine job testing an experimental new train, reports begin coming in that the dreaded "Second Visitation" has begun, with the aliens utilizing a bioweapon that transforms people into monstrous, tar-spewing zombies. Conscripted by the military to deliver vital cargo, you must keep the train running and rescue as many survivors as you can before you reach the final station...

Gameplay is split into two segments. Onboard the train, you must keep your passengers fed and healthy while maintaining the train's faulty, untested systems through various minigames until you reach your next stop. From there, you must explore the monster-infested stations to find food, ammo, and medkits, while also looking for any survivors. The game is split into five chapters; at the end of each chapter, you will receive rewards from the people you save.

A DLC side-story, The Only Traitor, was released a year later, answering some lingering questions from the main story while raising a few of its own. In it, you play as a doomsday prepper named Peter trying to reach safety after the onset of the Second Visitation. Gameplay is notably different from the main story - you no longer have to manage the hunger and health of your survivors or maintain your transport (a Cool Car rather than a Cool Train), and merely need to collect a set amount of supplies to reach the next level. This is balanced out by only allowing you to bring one survivor with you at a time, with your crafting efficiency and between-level healing tied to their skills.

No relation to The Station (which is set in space), or Environmental Station Alpha (which refers to a domed environment.) Compare Fear Equation, which is also about being a train driver during an apocalypse.

The Final Station provides examples of: