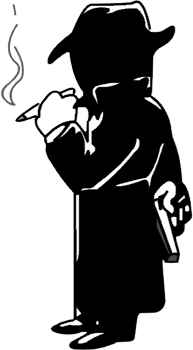 Who could it be?note Believe it or not, it's just me.
"A century ago on the low hills along the border between the southern states and turbulent Mexico, a mystery man appeared... a man with a sad, impenetrable face. Who was that man? What was his secret?"
—Tagline for Django
Advertisement:

Some characters first appear with most or all of their identifying traits withheld from the other characters and the audience. They likely won't be greeted by other characters as friend/lover/family/colleague/boss. Their faces and forms are often hidden in shadow or actual disguise. Their very presence may go unnoticed by some or all of the other characters. Yet they keep appearing: the author repeatedly mentions them in the text; the camera focuses on them and follows their actions. The audience (and perhaps one or more of the characters) is wondering, "Who are you?" That's the point.

Withholding information in this fashion piques the audience's curiosity. Without it, the audience can't form solid expectations about the character. Part of the plot development may also be in doubt, or else solving the mystery of this character becomes the plot. Or one of several. The audience and the other characters may be let in on the secret in tandem, or the audience may learn the truth first and the characters only find out later. Then again, some secrets are never revealed.

Mysterious Strangers can be a source of surprise for both other characters and the audience, often by displaying an unexpected talent or triggering a plot twist. They may be a source of information via an anonymous phone call or a written note. They may even secretly provide the heroes with material resources. They may come forward at a key moment, throwing the villain off guard or giving the hero a much-needed respite.

The precise nature of their secret(s) will determine their role in the story. Subtropes to this include:

Not to be confused with the Mark Twain novella of the same name.