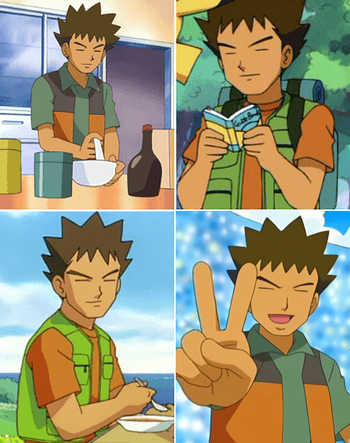 Harry: I could do it with my eyes closed!
Tommy: You do everything with your eyes closed.
— 3rd Rock from the Sun, "Same Old Song and Dick"
Advertisement:

This describes characters who appear to have their eyes shut constantly, except, perhaps, for a few instances of surprise or shock. Nevertheless, they still give every indication of being able to see — which implies that this characteristic is actually more of a pronounced squint.

This is an old device to imply wisdom; more recently, it's been used as a device to show "wise guys". This device, when used as such, is called "kitsune no me" in Japanese ("fox eyes" or "shifty eyes" in English).

A common variation of this trope is to make the character close his or her eyes into an arc rather than a simple horizontal line. Characters whose eyes are fixed in that position are generally optimistic and almost always unconditionally happy, but more often down-to-earth instead of ditzy. These characters may be prone to comic obliviousness, but outright stupidity is rare. The exact way the closed eyes are drawn can add a lot to this trope — representing anything from serenity, dignity, smugness, humor, indifference or even someone trying to fake any of those.

Finally, closed eyes are sometimes used to depict people who are down and out with their lives as a sign of depression.

Where Eyes Always Shut and Beware the Nice Ones overlap, the character's eyes may open when it's time to get dangerous, usually right before unleashing that Limit Break or entering a state of Unstoppable Rage. This is not uncommon among Affably Evil villains; if the villain always puts up a happy facade, expect those eyes to open when the Berserk Button is activated, just before that final transformation or ultimate attack is unleashed. Either way, the character's now-visible eyes may follow other various Eye Tropes as well. Compare the Clint Squint. Dreary Half-Lidded Eyes is a downplayed trope, while in Blinding Bangs their eyes aren't even visible.

Not to be confused with the Stanley Kubrick film, Eyes Wide Shut.