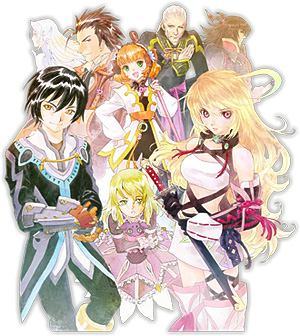 "Even if you present them with a more noble way, humans won't change. I've been watching them for two thousand years."
Advertisement:

Another entry in the Tales Series, released in Japan for the PlayStation 3 on the 8th of September 2011. It currently holds the record for the fastest-selling Tales Series title and the second fastest-selling PS3 title with approximately 525,605 copies sold in the first week. It was released on August 2013 in North America and Europe... where it dethroned Tales of Symphonia as international best-seller

. Thanks to some math, this would mean it is now one of a handful of Tales games to sell a grand total of a million-plus units worldwide. In short: this game's pretty successful.

In the world of Rieze Maxia, humans and monsters co-exist with the Spirits, who grant their power to humans in exchange for protection. The most basic form of this is the ability to channel mana as Spirit Power, which can be used to power everything from street lamps to magical spells. Two countries vie for supremacy of Rieze Maxia: Rashugal, an empire whose extensive use of Spirit Power has granted it incredible prosperity; and Auj Oule, a developing country whose power comes from the control of monsters.

Jude Mathis is a bright young medical student studying in the capital of Rashugal. When a large number of patients are suddenly admitted to his hospital, he investigates the cause and encounters a mysterious woman called Milla Maxwell. Milla claims to be "Maxwell", the legendary Lord of Spirits, and has come to investigate a recent wave of spirit deaths within Rashugal. Together, she and Jude discover a horrific secret lurking in the heart of Rashugal, and are soon forced to flee from the military.

Other characters include Alvin, a smooth-talking mercenary with a secret agenda; Leia Rolando, Jude's childhood friend and trainee nurse; Elize Lutus, a timid but gifted Spirit Summoner with a talking doll named Teepo; and Rowen J. Ilbert, the dedicated butler of a respected noble family within Rashugal.

The battle system is a fusion of the Destiny (Capacity Points) and Symphonia (TP) styles featured in previous Tales games, allowing for constant combos as long as "Assault Counter" points remain. The most notable addition is "Link Mode", which allows two characters to coordinate their actions far more closely, protecting each other, attacking together and executing powerful tag team attacks called Resonance Artes. The Skit System from previous Tales games has also been expanded, now including more inter-party banter during battles and casual dialogue while wandering through the overworld. Since there has been an official name for them, but the game doesn't differentiate between the two "long" and "short" skits, the short skits have been called "chats".

A direct sequel to the game, simply named Tales of Xillia 2, was released as a Japanese Winter 2012 PS3 title

and was released in North America and Europe in August 2014.

You have been warned of very critical spoilers!

Trope associated with this game: