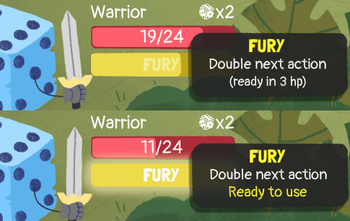 "My Limit Break involves a moose, the demon Baphomet and a Kuiper Belt object. It takes four hours and you can't skip any of the cutscenes."
— Pintsize, Questionable Content #707
Advertisement:

A powerful attack or technique available after some requirement during battle is fulfilled. In video games, this is often indicated by a refillable or chargeable gauge on the menu allowing the player to gauge when it will become available, how strong it will be, or so on; and the most common requirement is taking (and/or or giving) damage in combat. Thus, it's usually a kind of Evolving Attack. May overlap with Super Mode, or may be a form of Desperation Attack.

It may be accompanied by a Super Move Portrait Attack.

The popularity of the trope, and its assimilation into numerous forms of media is a testament to the widespread effect that Final Fantasy VII, the originator of the term, had in making RPGs more mainstream. Although a nearly identical game play mechanic appeared a few years earlier in Lufia II: Rise of the Sinistrals, the concept has become synonymous with the Final Fantasy games series and the term is now widely used as a catch-all term to describe such attacks.

The inverse of Break Meter. For when you can make a vehicle do this, see Overdrivenote Which has nothing to do with the limit breaks used in Final Fantasy X. or Nitro Boost. See EX Special Attack for a downplayed version of this trope. Not to be confused with limit breaks in Exalted, which are closer to Sanity Slippage.