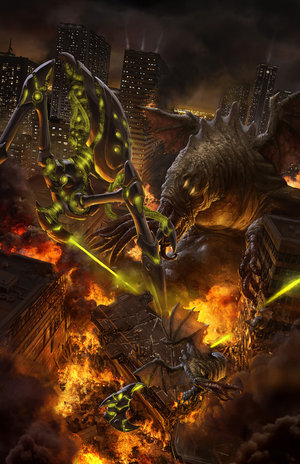 Hell yes.
Reach Out and Crush Someone!
Advertisement:

Monsterpocalypse is a collectible miniatures game from Privateer Press.

The idea is pretty simple: players take the role of giant monsters representing one of several factions vying for control of the Earth. The game itself is a little more complicated...

In a game of Monsterpocalypse, each player's monster is supported by up to 15 smaller figures representing "units", most of which can assist in fighting and some of which provide additional abilities to other figures. There are also figures that represent buildings, from apartment buildings and commercial skyscrapers to industrial sites, radar stations, and headquarters installations for the various factions, most of which will get destroyed during the battle between the two monsters; each player brings 2 to 12 buildings with which to populate the play map representing the battlefield.

Gameplay revolves around a pool of Action Dice which are used to spawn units, or to move or attack with units or monsters. Action Dice spent on units are moved into the pool for the monster, and vice versa; thus, players usually alternate between a Unit Activation (where they spawn, move, and attack with units) and a Monster Activation (where they move and attack with their monster). Players can also "power up" their monster by rolling action dice; this gives Power Dice that can be spend on devastating Power Attacks, to enhance regular attacks, or to transform their monster from its default Alpha form to its more powerful "Hyper" form. The object of the game is to defeat the opponent's monster by killing both its Alpha and Hyper forms.

Big In Japan released even more monsters, units and buildings.

The game is also being used as the basis for a Voltron game, where Voltron and the Galaxy Garrison forces fight the Robeast Lo-Tron and the Drule Empire. All Voltron units use the same rules and stats as the rest of Monsterpocalypse (Galaxy Garrison are Protectors, Planet Doom are Fiends), and are fully compatible. So if you desire to have the G.U.A.R.D. to face down the Drule Empire, or want to see Voltron battle Martians, you can.

Desperado Publishing produced a Monsterpocalypse Comic Book series in 2008 to 2008.

In summer of 2010, a movie adaptation directed by Tim Burton and written by John August was announced.

A Continuity Reboot was announced in 2018

, taking the game more in a miniatures wargaming direction: models that you have to assemble and paint, but getting rid of the blind-bags and allowing you to more easily convert the miniatures. Naturally, there are also more Monsters and Units, more Factions, and a few of the existing ones have been shuffled about. The Tritons have thrown in with the Protectors, and Green Fury is growing into their own force. Also, Radioactive Ooze, Invaders from alternate dimensions, and giant Space Dragons are all coming to play.