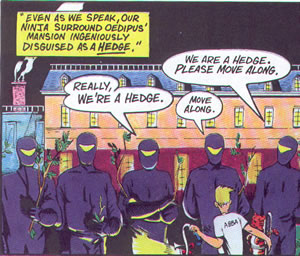 The masters of invisibility and deception, everybody.
Aya: Born in darkness, living in darkness... such is the fate of a ninja! I am Aya, ninja warrior!
Misty: But don't you think that color's a little bright for a ninja?
Aya: I don't need your fashion report!
— Pokémon: The Series, "The Ninja Poke-Showdown"
Advertisement:

The result of Mook Chivalry when applied to Ninja.

While suffering from the law of Conservation of Ninjutsu, Ninja mooks not only forget how to fight properly and how to take advantage of their superior numbers, they also forget what a ninja truly is.

Back at the dojo, didn't their sensei explain that the whole point is to be stealthy, secretive, even invisible? Why do they suddenly feel the need to appear in broad daylight, dressed in stereotyped kabuki-theater stagehand costumes, yell "Kiai!" as loudly as possible, and perform gymnastics and twirl their weapons like they're putting on a show? Even worse, they feel the need to do these things from a distance of about fifty meters, even when they know the enemy have guns (though this isn't always a problem).

The real reason is the works need to make sure the audience sees the ninja. There's also this funny paradox: ninja are assassins. Assassins traditionally killed people through underhanded methods — stabbing In the Back, poisoning, etc. — not direct battle. Not only is this not honorable, it's not as exciting as a full fledged fight. Heroic (and technicolor) ninja are smart enough to avert this, while villainous ones are still needed to entertain the viewers.

Typically the justification for visible assassins is that, if you can actually see the ninja, then you're either going to die soon, or you are a Worthy Opponent. There is also Truth in Television at work here, since, historically, ninja rarely ever wore black garb when looking like a commoner or somebody else more uninteresting would be easier. After all, if you're caught doing something suspicious as a commoner, you can probably pull a satisfactory explanation out of your ass or blend into a crowd if a chase starts. If you're caught wearing stereotypical ninja garb while doing something suspicious, the enemy isn't going to wait for an explanation. Quite often, these kinds of ninjas, along with the Overt Operative type of personnel, are used as distractions so the real covert operatives can get to work.

The Theme Park Version of ninja. Often seen in McNinja. See Highly Conspicuous Uniform for the military version of this trope, and Overt Operative for the super-spy version. Contrast with Technicolor Ninjas, who are stealthy despite their brightly-colored outfits (and whom some Highly Visible Ninja, by virtue of their experiences, eventually become). Often overlaps With Catlike Tread if the ninjas are still considered to be stealthy despite actually being highly conspicuous.