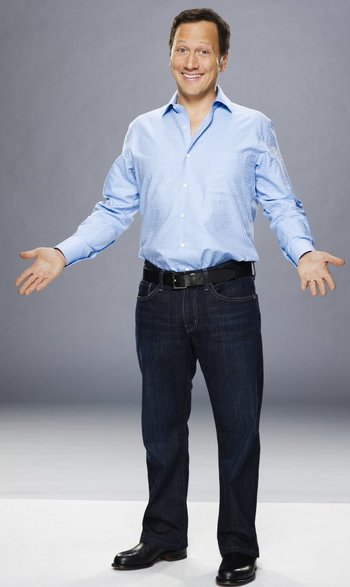 Rated PG-13!
"I try not to have too much of an ego. I'll do anything."
Advertisement:

He is best known for his long tenure on Saturday Night Live in the early-to-mid 1990s (during the "Bad Boys of SNL")note Schneider, believe it or not, is the show's first Asian-American cast member. His mother's side of the family is originally from The Philippines while his father's side is Jewish-American and subsequent string of comedy films, including frequent cameos in Adam Sandler movies. Schneider has become infamous for his numerous appearances in poorly received movies and for playing racially offensive characters.

While Schneider was more known for his recurring characters on SNL (Richard Laymernote the "Makin' Copies!" guy, the "Out of Africa" clerk who always tells his customers that his wares are good for stashing marijuana in it, The Sensitive Naked Man, and an employee at Hub's Gyros), he did do some memorable celebrity impressions, such as Soon-Yi Previn (around the time that the "Woody Allen dating his adopted stepdaughter" scandal was fresh in the news), Adolf Hitlernote ironic, considering that Schneider is Jewish on his father's side, former SNL cast member Billy Crystal, one half of the Menendez brothers (Erik. Lyle was played by guest host John Malkovich), Elvis Presley, Fred Schneidernote no relation from The B-52s, k.d. lang, Jeff Gillooly (back when the Tanya Harding/Nancy Kerrigan feud was fresh in the news), Peter Lorre, and Rick Dees.

One of his children is singer Elle King. His brother John Schneider is a manager and producer in his own right.