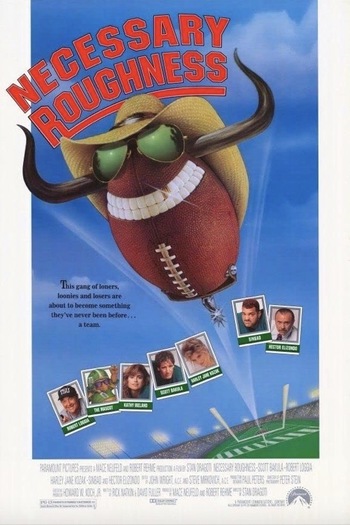 Paul Blake (Bakula) is a former high school football star who gave up his dreams of playing college ball and probably going on to the pros to stay home and run the family farm after the death of his father. When the Texas State University football team, the Fighting Armadillos, becomes involved in a scandal resulting in almost the entire team being expelled or disqualified, the new coaches must assemble a team from the ragtag group of goofballs willing to join... and the now thirty-plus Blake, lured to college and the team by the idea of finally putting to rest his dreams of what might have been.

It falls on Blake, as quarterback, along with Coach Eddie "Straight Arrow" Gennero (Elizondo) — a former big-time college coach lured to Texas State with the promise of building a program from the ground up, with no booster interference — and assistant coach Wally "Rig" Riggendorf (Loggia), to try and turn this strange group of nobodies into a Band of Brothers, while the entire time the team is under the baleful eye of Dean Elias (Miller), who hates college sports teams and wants any excuse to destroy the team and get rid of football forever. (Yeah, in Texas. As you can imagine, he's quite the popular guy.) Along the way Blake falls for one of his teachers, journalism professor Suzanne Carter (Harley Jane Kozak), with whom he turns out to have a past of which he was completely unaware.

The film averts one of the major underdog sports movie tropes. See, turns out that assembling a ragtag team of weirdos who have never played football doesn't suddenly rocket you to success and send you to the finals. The Armadillos have an absolutely terrible season, and in the end the final game isn't about winning the championships... it's about winning their pride and dignity instead.

Not to be confused with the USA network show of the same name.