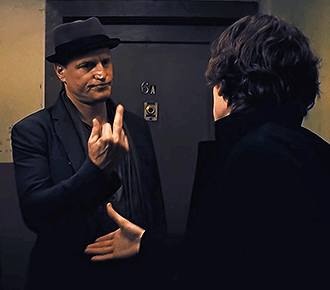 Bob: Hello, Lex. [puts out his hand for a handshake, but Lex refuses] Oh, c'mon, Lex, this Art of War stuff is for amateurs.
Lex: It's not that. I just don't like you.
— Smallville, "Hug"
Advertisement:

Bob is introduced to Charlie for the first time. Charlie extends his hand for a handshake, but Bob flatly refuses the offer.

Can be done in a variety of situations for a variety of reasons. Bob may be an Ineffectual Loner or Anti-Hero who is merely displaying his badass demeanor or desire to work alone. Charlie may be some sort of villain or corrupt figure, and Bob is merely expressing his distrust or disrespect towards Charlie by refusing his handshake. Or Bob might be a foreigner from a place where body contact is taboo (or, in sci-fi works, an alien who doesn't get the concept of a handshake). Or Bob is Terrified of Germs. Or, Bob Hates Being Touched. Or Bob's possibly just a Jerkass.

A comedy version of this trope has Bob refusing the handshake for a humorous reason, such as Charlie having just sneezed into his hand.

As an alternative, people who refuse handshakes may instead go for Handshake Substitutes.