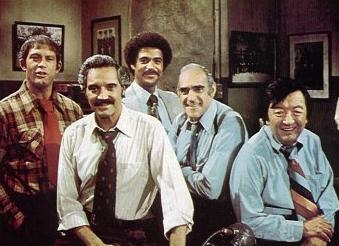 The cast of season 3 (1976-77). From left to right: Wojciehowicz, Miller, Harris, Fish, and Yemana.
Yemana: No, I don't watch shows like that. I can't enjoy them because, being a cop myself, I spot the mistakes and inaccuracies and the fantastic things that in real life never happen.
Victim: On the show they caught him!
Yemana: Good example!
Advertisement:

A police-themed sitcom airing on ABC from 1975–82, Barney Miller was considered quite realistic by actual cops, especially in comparison to police dramas at the time. The episodes tended to take place entirely within the bleak, ancient squad room of the (fictional) 12th Precinct in New York City's Greenwich Village, as the detectives booked and processed various suspects. Action sequences usually took place off-camera and were described by the detectives as they returned from the scene. What made the show worth watching was the razor-sharp writing

and the eccentric personalities of the detectives, including:

Throughout the run, the show tried adding new characters to the cast; most of them would be given a "test run" of about three episodes to make an impression. More than half a dozen cops were "auditioned" this way. Save for Dietrich, none of them really worked, resulting in Chuck Cunningham Syndrome. (Linda Lavin probably would have stayed on too, if she hadn't been offered the lead role in Alice (1976); she appeared promiently in flashbacks despite being in only five episodes). Midway through the fifth season, actor Jack Soo (Yemana) died. The cast did a memorial episode out-of-character for Soo, but Yemana was never killed off in so many words. Once in a while, he would be mentioned in the past tense, sometimes with an air of wistfulness. When Levitt worked in the detective squad room, he took over Yemana's desk.

This show is also remembered for its super-catchy Instrumental Theme Tune, which has quite possibly the most famous bass line in TV history.

Characters and references to the show still turn up. In a novel spinoff of The Blair Witch Project, Confessions of Rustin Parr, the investigations were headed by Detective Nicholas Yemana. In William P. Young's supernatural murder mystery The Shack, a Polish police detective says his name is "spelled just like it sounds". In Frasier, one of Martin's police friends was Stan Wojciedubakowski, and when he died, Martin briefly dated his widow. The Police Procedural Romantic Dramedy Castle is, like this show, set in the Twelfth Precinct of the NYPD. In Jo Nesbø's novels of the police murder squad in Norway, Oslo's detective force has its own officer Bjarne Mjølle.

Police detectives often cite this as the best cop show ever seen on television. Dennis Farina, who really worked as a policeman before becoming an actor, says it's the most realistic. In 2014, it was called the most intelligent and literate U.S. sitcom ever made.

The fictional detectives were made honorary members of the NYPD, and the chalkboard roster and Jack Soo's coffee cup now reside in the Smithsonian.

Now has a character page for the main cast and recurring characters.