Sleeping Their Way to the Top 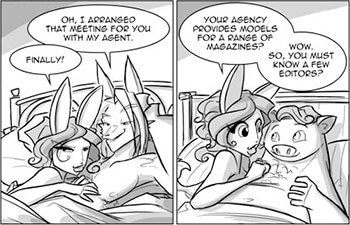 For a kid from the small street I did very well on Wall Street
Though I never owned a share of stock
And now that I'm known in the biggest banks
I'm going back home and give my thanks
To the one who broke my heart in Little Rock!
— "2 Little Girls from Little Rock"

There are many ways to rise to the top, some more pragmatic than others. Some people decide to use their charms and sex appeal to boost their career. It's usually frowned upon by other characters and may have certain downsides to it, but for some, it proves to be the key to their success.

The specific tactics employed might be very diverse: from simply making an impression by ramping up one's good looks and sex appeal, to seducing someone into a quick fling in return for favors, to forging a long-lasting relationship with an important person, to enacting a complicated gambit involving multiple relationships and flings. It doesn't need to involve actual "sleeping" (sex), but it usually does. Sometimes, it can even be completely accidental on the character's part, if the powerful people who are attracted to them decide to further their career on their own volition.

The character who's Sleeping Their Way To The Top often finds themselves under a barrage of criticism and disdain from other people. One reason, of course, is that many would consider such tactics unfair, and the resulting career advancement undeserved, implying that the character lacks any talent or experience necessary for the positions they get. If the character's a woman, some accusers may add a misogynistic slant, using her as "proof" that women are so incompetent it's the only way for them to advance in life; and there might also be a shade of Slut-Shaming involved.

Characters who have done nothing of the sort could also get accused of Sleeping Their Way To The Top, usually as an underhanded tactic by their adversaries or rivals to tarnish their reputation, or just as an insult said out of spite.

Note that even if a character is Sleeping Their Way To The Top, it doesn't necessarily mean that they're untalented or unsuited for the position. Sometimes they might just see it as the only way to overcome severe adversity in their career or society in general. And as mentioned earlier, sometimes it happens accidentally, with no intention on the character's part.

One common narrative is the story of a prostitute or courtesan who marries up and escapes their lowly social status.

Sub-Trope to Sex for Services. Super-Trope to Black Widow, Gold Digger, and Casting Couch: it's assumed to be a very very common practice in showbusiness, that's why showbiz-related examples have their own subtrope. Please add all movie/theater/music/modeling examples to Casting Couch rather than here.

Overlaps with Sleeping with the Boss and Sextra Credit.