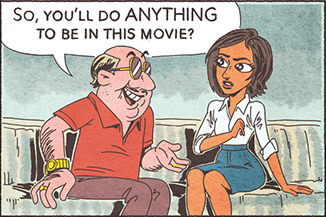 "I don't suppose I'm the only one who's had to fuck her way to the top."
— Jerilee Randall (accepting "the Award"note no, not the Oscar), The Lonely Lady
Advertisement:

The time-dishonored method for young aspiring entertainers to advance their careers: by sleeping with the producer. Although the term itself stems from the movie industry, it also happens in different types of showbusiness: music, modeling, theater, etc.

Subtrope to both Sleeping Their Way to the Top and Sexual Extortion, with specific examples leaning more towards one or the other. See also Model Scam, when it's used as a scam, and there is no job available; Dungeonmaster's Girlfriend, when a person gets better "roles" (or other benefits) in a roleplaying game due to a special relationship with the DM; and Sleazy Photoshoot, which is an actual shoot but has the model being put in similarly compromising situations.

To avoid controversy, Real Life examples should not be discussed. Examples should stick to this trope as treated in fictional shows about show business.