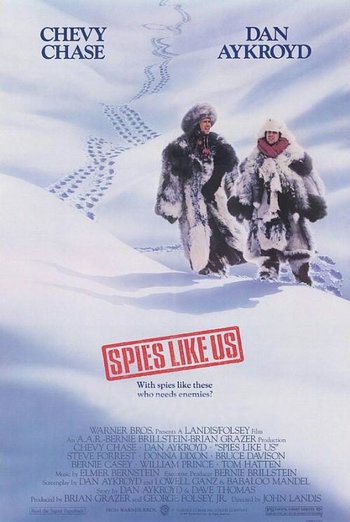 A 1985 comedy directed by John Landis, Spies Like Us basically resembles a Hope/Crosby Road to ... picture updated for The '80s. The film follows the misadventures of two novice intelligence agents sent to the Soviet Union as disposable decoys for the real agents. The movie stars Dan Aykroyd, Chevy Chase, Steve Forrest, and Donna Dixon.

Two totally incompetent applicants, Emmett Fitz-Hume and Austin Millbarge, are chosen from a CIA recruitment program. They are parachuted into Pakistan and eventually end up in Afghanistan, chased by the Russians, where they learn they are being used as decoys to draw out the Soviet defenses. Two real spies are sent in. Their mission is to hijack a Soviet missile launcher, launch the Soviet missile and test the new U.S. orbital defense laser.

A Family Guy episode titled "Spies Reminiscent of Us" serves as a sequel to this film. It's referenced heavily in the song "Out With a Bang" by Self (even the title is a quote from the film), and there are also multiple references in the NBC show Chuck.