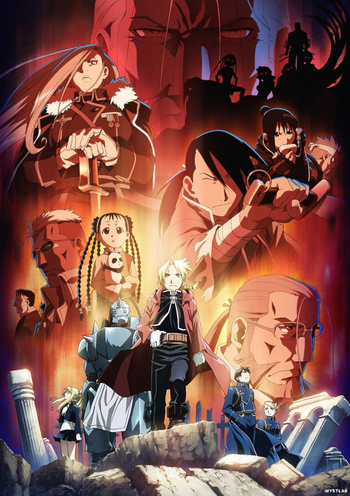 "There's no such thing as a painless lesson. They just don't exist. Sacrifices are necessary; you can't gain anything without losing something first. Although, if you can endure that pain, and walk away from it, you'll find that you now have a heart strong enough to overcome any obstacle. A heart made Fullmetal."
— Edward Elric
Advertisement:

Created by Hiromu Arakawa and running between August 2001 to June 2010, Fullmetal Alchemist (Japanese title Hagane no Renkinjutsushi, or "Alchemist of Steel") follows the story of the Elric brothers, Edward and Alphonse, who live in a world where those who know how to do so can practice the art of alchemy (transmuting one material into another or reshaping it into new forms). The brothers' skill with alchemy at an early age led them to believe they can bring their recently-deceased mother back to life using human transmutation — a forbidden, taboo practice of alchemy. Their hubris costs Ed his right arm and left leg (now replaced with artificial "automail" limbs) and leaves Al as a soul affixed to an empty suit of armor. Years later, the brothers set out to find the Philosopher's Stone, a legendary artifact said to allow any form of transmutation without the necessary Equivalent Exchange.

In 2009 — as the manga was nearing its end — a new anime series, Fullmetal Alchemist: Brotherhood, was announced. It follows the manga's story much more faithfully (with nearly no filler) while skimming through material already covered in the 2003 series so it could get more quickly to the point where the 2003 series diverged. When it was released in the US, nearly the entire original cast of the 2003 series' dub reprised their parts.

After the end of Brotherhood, a movie set within the series — Fullmetal Alchemist: The Sacred Star of Milos — was released in 2011 (and 2012 for the US). Unlike The Conqueror of Shamballa (a sequel and ending the first anime series), this film exists as a side-story to the manga/Brotherhood.

In the US and Canada, Viz Media licenses and publishes the manga series, while Brotherhood is available on Crunchyroll, Netflix, Hulu, and HBO Max both dubbed and subbed on all sources. (The 2003 anime can be found on Netflix as well.) Elsewhere in the English-speaking world, Brotherhood is licensed to Manga Entertainment in the UK and Ireland, while Madman Entertainment distributes both the show and the manga in Australia and New Zealand.

Example of:
Something Only They Would Say