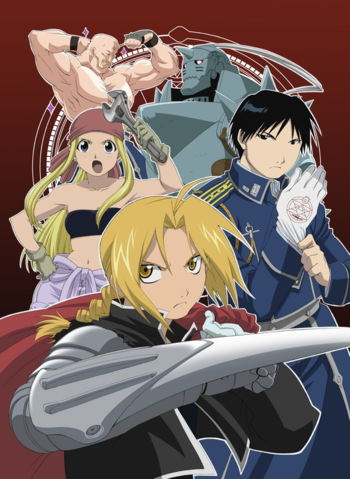 The reason I want to spit out these sentiments
Is I have no other proof I even exist
My future that I thought I'd managed to grasp
Is a contradiction of all I thought that I had
"Humankind cannot gain anything without first giving something in return. To obtain, something of equal value must be lost. That is Alchemy's First Law of Equivalent Exchange. In those days, we really believed that to be the world's one, and only, truth."
— Alphonse Elric, from the first Opening Narration
Advertisement:

This page deals with the 2003 series that diverged from the manga early on. For Hiromu Arakawa's original manga and its direct anime adaptation (titled Fullmetal Alchemist: Brotherhood), please see Manga.Fullmetal Alchemist.

Brothers Edward and Alphonse Elric live in a world where alchemy is possible, though governed by the law of Equivalent Exchange ("to obtain, something of equal value must be lost"). As young boys, the Elrics — who showed promise in alchemy at an early age — lost their mother; in their grief, they attempted to bring her back to life via the forbidden practice of human transmutation. Ed and Al paid a steep price for their hubris: the former lost an arm and a leg (which were replaced with mechanical limbs), while the latter became a soul attached to an empty suit of armor.

The Elrics' quest to return their bodies to normal leads to the pursuit of the Philosopher's Stone, an artifact believed to allow alchemists to perform any form of alchemy (including human transmutation) without the necessary Equivalent Exchange. In order to make real progress in their search, Ed becomes a State Alchemist, working for the government to help solve their problems while he and Al research the Stone's existence. During their adventures, Ed and Al discover startling truths about their world, alchemy, the Philosopher's Stone, their own family, and the forces working to manipulate the Elrics' search and lead them towards the Stone for a much more sinister purpose than what the brothers have in mind.

This show Overtook the Manga about halfway through its run, but rather than running numerous filler episodes to make up for it, the anime's writers consulted with Hiromu Arakawa to craft a wholly different ending to the story. The approach makes this show a Pragmatic Adaptation, but one made with approval from (and the encouragement of) the original mangaka. A theatrical film — Fullmetal Alchemist: The Conqueror of Shamballa — resolved a number of plot threads left hanging after this show's conclusion.

A Recap page can be found HERE.

open/close all folders
A - E
F - O
P - Z
"But nothing's ever perfect; haven't you realized that yet? Earth turns on a tilted axis, just doing the best it can."
Feedback

Example of:
Dies Differently in Adaptation