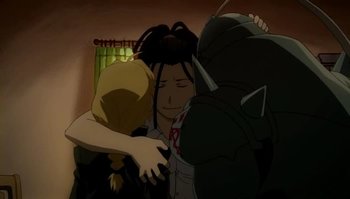 She couldn't have children of her own, but she did a damn good job of raising two fine young boys.
Advertisement:

Despite being a dark series that has both Tear Jerker and Nightmare Fuel pages, the characters' hope and determination toward achieving victory have lead to a lot of heartwarming moments, and so much that it became a first Anime/Manga series that needed a separate page for all the warm moments.