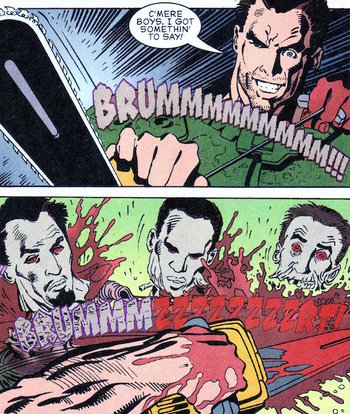 "Aaah! Chainsaw! The great communicator!"
"I love this saw! This saw's a part of me, and I'm gonna make it a part of you!"
— Buzzsaw, The Running Man
Advertisement:

Basically, chainsaws are good. Good here having the meaning of "totally unstoppable weapons of mass destruction." Nothing can stand before their roaring, multi-toothed might; only death awaits any who challenge a chainsaw-wielding maniac. Death and Gorn.

Since they're usually used in media where carnage is key, chainsaws are typically a favorite tool of Ax-Crazy lunatics, horror villains, and survivors of the Zombie Apocalypse (both good and bad).

Realism isn't usually a priority in media when chainsaws start swinging. In reality, the tools make pretty terrible and hazardous weapons for a wide number of reasons. Even in many works of fiction, chainsaw wielders often get carved up by their own weapon either accidentally or their opponents using it against them.

A common way of playing with this trope is to make a chainsaw part of a Swiss Army Weapon.

See also Vibroweapon, Deadly Disc, Rule of Cool, Awesome, but Impractical. Compare An Axe to Grind and Sinister Scythe, where other gardening/logging implements are used as weapons.

While the trope name mainly refers to chainsaws, it has mutated to also include the use of circular saws/buzzsaws and even lawnmowers as well. This trope can also be considered the modern version of An Axe to Grind as both tools are normally used for cutting down trees.

Does not have anything to do with Hedge Trimmer, which is about editors who clean out clutter and other dirtiness from This Very Wiki, such as Word Cruft and Conversation in the Main Page.

The Chainsaw special has Mike cut through the machine with his chainsaw and then some.

The Chainsaw special has Mike cut through the machine with his chainsaw and then some.