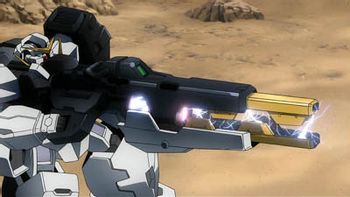 A specific kind of Energy Weapon consisting of two or more prongs separated by an empty space. The blast from this type of weapon is generated within the space or fired through it, often heralded by crackling streams of energy zipping between the prongs as the weapon charges. Expect the energy to go out of control and explode violently if one of the prongs is damaged before firing.

How the energy being charged does not simply disperse into the air is never really touched upon, although, one can expect a Hand Wave along the lines of "Magnets." Suffice to say, the audience shouldn't even feel compelled to question this logic, because it looks really freaking awesome, to the point where things like reality just aren't very important anymore.

Some times a regular, less powerful weapon may be able to open up into one of these for a truly staggering blast, which is where this trope gets its name.