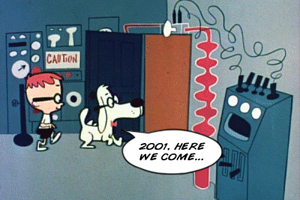 If only our Wayback Machine could do that...
Mr. Peabody: I think you'll like this Sherman; Today we're going to witness the historic moment when chef George Crum shows the world his greatest creation: the potato chip!
Sherman: Lemme guess, instead of potato chips, he makes carrot chips. Or he doesn't believe in himself and we have to and do a bunch of time consuming montages to get his confidence back. It's never that simple.
— The Mr. Peabody & Sherman Show
Advertisement:

This trope seems to derive from the Adventure Towns treatment of Time Travel. Periods of history are treated like places rather than points on a timeline. New York in 1897 isn't the cause of New York in 2007, it's just 110 years earlier, and is free to have its own history and events.

This could technically be considered a case of Make Wrong What Once Went Right and Terminator Twosome, in that the Main Characters are changing history to make their (that is, our) timeline happen instead of the one with Roman vampire werewolf sorcerers.

Can be handwaved by having a Delayed Ripple Effect.

See also Meanwhile, in the Future…. Compare to Field Trip to the Past.