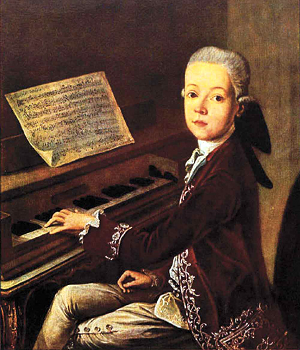 While you were still learning how to SPELL YOUR NAME, he was composing HIS OWN SYMPHONIES!
"I rocked harder than you when I was five-years-old!"
— Wolfgang Amadeus Mozart to Skrillex, Epic Rap Battles of History
Advertisement:

A young genius — in their pre-teen year. Any genius below 13 and above 3 is eligible for the title of a Child Prodigy. Sometimes ignored or discriminated against by those who consider them Just a Kid. Tends to be an Innocent Prodigy at times due to their age.

In a setting with mostly older cast, a Child Prodigy Grade Skipper might be introduced to appeal to a younger demographic.

Very often The Smart Guy on The Team, particularly in Super Robot shows.

Note that although the character is likely to be both this and Wise Beyond Their Years, they are two distinct tropes because intelligence and wisdom are two different things. This trope also may overlap with Adorably Precocious Child or Innocent Prodigy. They may also be seen enjoying something that goes over other kids' heads, which could be Entertainment Above Their Age if it's a work of fiction.

For the record, despite some Real Life uses of the term

, a teenage/high school-age character in college (13 — 19) would be a Teen Genius, not this trope. See also Brainy Baby which is the even younger counterpart (3-years-old and below).

She's basically a kindergartener and can speak fluent Thai.

She's basically a kindergartener and can speak fluent Thai.