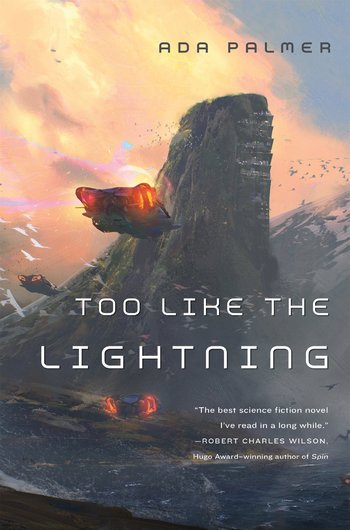 "Would you destroy a better world to save this one?"
— Mycroft Canner (quoting Apollo Mojave)
Advertisement:

The Terra Ignota series by Ada Palmer are a series of Science Fiction novels set in a future that is neither a utopia nor dystopia.

It is the year 2454, and the world is nearly unrecognizable. Geographic nations dissolved with the invention of transportation that could circumnavigate the globe in a few hours, the standard family unit disappeared following groundbreaking psychological research that determined groups of peers were more conductive to raising great minds, and all religion has been outlawed following the destructive Church Wars several centuries before. Sensayers — a combination of priests, scholars, and psychologists who teach any and all forms of spirituality without preaching or judging — have filled the spiritual niche. The world has been at peace for hundreds of years.

Then, one day, a sensayer by the name of Carlyle Foster walks in on a young child bringing a toy to life. But Bridger is only a small part of a vast political battle between rival nation-strats, corporations and Hives containing billions of people each.

The series is now complete after the publication of the final installment. It has four novels, the titles of which are: