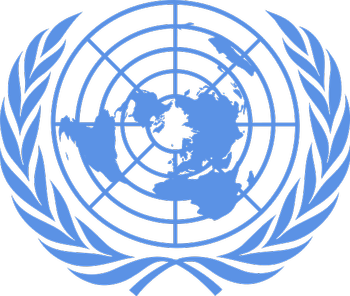 The UN emblem.
"The UN is the accepted forum for the expression of international hatred."
— Sir Humphrey, Yes, Prime Minister
Advertisement:

Those dudes in New York City who try to solve the world's problems. They were set up to prevent World War III; heck, it's worked so far! At the very least, the UN has been more successful than their predecessor, the League of Nations, who were created to prevent World War II - and we all know how successful they were at that. The organization was founded on October 24, 1945, as the official replacement for the League of Nations; it was known as UNO (United Nations Organization) in its early years, partly because the term "United Nations" had previously been used for the Allies in World War II. They've always been based in New York City, but didn't start moving into their permanent headquarters at Turtle Bay until 1950.

Actually, they're ambassadors from all the UN member states, plus the many, many interpreters. Since every nation can join (and almost all have, although Switzerland didn't join until 2002!) that means every nation can stand up in front of the world and air their grievances.

The UN is funded based on the idea that the richer you are, the more you pay.

The UN consists of many parts. The General Assembly and the Security Council are the most well known. The General Assembly is much like the U.S. Congress, specifically the Senate: every nation gets one vote, although the Soviet Union got three (one each from Russia, Ukraine and Belarus, and yes, they always voted the same way).note Stalin originally wanted all sixteen of the Soviet Republics to get a vote on the theory that the Soviet constitution was a treaty between sovereign states. Harry Truman more or less said, "Well, the US Constitution was originally a treaty between sovereign states, so each one of the 48 (at the time) should get a vote." Stalin shut up after that, but the Ukrainian and Byelorussian SSRs got votes because the US was feeling nice and didn't want the USSR to feel that it was getting short shrift (the US had way more allies at the time than did the Soviet Union). The Security Council is where the real power is. Since 1966, the Security Council has had 15 members made up of five permanent members (commonly called the Permanent Five or P5 for short) and ten rotating countries elected for two-year terms by the General Assembly. Only the Security Council can take military action. Much of the "weakness" of the UN is due to the fact that any permanent member (US, UK, Russia, China, France) can veto any Security Council resolution simply by voting against it. The theory was that because Security Council resolutions are (theoretically) binding, it would not be reasonable for one of the Big Five to be forced, by law, to act against its interests. Permanent members which wish to express displeasure with a resolution but don't see much use in pissing everyone off by vetoing it tend to abstain; that way, they don't vote for the resolution, but they also didn't vote against it (which would be a veto). This wasn't written into the Charter, but became generally accepted as a solution to a common problem (a P5 not wanting to destroy a resolution because it didn't care about it that much, but also reticent to be seen to support it).

Thus you can see some of the problems. During the Cold War, the Soviet Union (and later China, when the vote was switched from the Republic of China to the People's Republic of China) would use the veto against the Western nations. Today, it is the United States which most often uses the veto, typically striking down resolutions it sees to be taking the Arab/Palestinian side in the Arab–Israeli Conflict. The veto power sometimes gets wielded by China (and less regularly, Russia) to strike down resolutions regarding human rights, even if it doesn't affect human rights in that country.

Other criticisms of the UN are that it hasn't agreed on a definition on terrorism over a decade since 9/11, and how one of its programs, "Oil for Food," proved to be a big scam where they failed to investigate or punish the people responsible. The Human Rights Council had Libya on it at the same time the General Assembly and Security Council enforced a no-fly zone on the country. Some people give the UN the derisive nickname of "the clubhouse of dictators, thugs, and tyrants."

Another criticism is the focus on the Arab–Israeli Conflict as measured by the number of (proposed) UN Security Council Resolutions - other conflicts that have lasted longer, caused more harm in terms of lives lost or affect far more people (India-Pakistan to give one example) have gotten far less attention than this one conflict. What the reasons for that are and whose side the bias is on is best not discussed here, though.

The General Assembly developed the Loophole Abuse in the form of Resolution 377(A), better known as "Uniting for Peace", which empowered it to send in peacekeepers if the Security Council was in a deadlock, but it's only been used from time to time.

Often overlooked is the many successes of the UN; The World Health Organization, Food and Agriculture Organization, International Civil Aviation Organization, UNICEF, and many more. Bickering and corruption is there, but so is cooperation and, at least, a place nations can try to settle things without shooting each other. Between the UN and Nuclear Weapons, the second half of the 20th century and the 21st century have been remarkably low on bloodletting.

The administrative head of the UN, as mentioned, is the Secretary-General. As such, he (or theoretically she, but this hasn't happened yet) is responsible for handling the day-to-day work of overseeing the UN's agencies and generally heading up the International Civil Service (as it is known). He also acts as a sort of Chief Diplomat of the World, responsible for advocating level-headed, reasoned solutions to problems between countries. These calls generally get ignored, but there you go.

The Secretary-General is elected by the General Assembly for a term of five years, and can theoretically be re-elected indefinitely and be from any country. In practice, nobody has had more than two terms, and all Secretaries-General have been from middle powers (neither unstable tin-pot countries nor the Great Powers). This is because the Security Council must make a recommendation to the General Assembly, and it usually just recommends one person on whom they all agree thanks to the Security Council veto. There is also an informal practice of rotating the post among the continents of the world; this came about largely by accident (see below), but it's worked well.

Interesting historical note: The Secretary-General of the original conference to draw up the UN Charter was none other than Alger Hiss.

There have been nine Secretaries-General:

The UN in fiction

Many, many examples, as well as those with a Fictional Counterpart (which now has its own trope, Fictional United Nations). The United Nations name and logo is subject to legal restrictions. Some works upgrade the UN to a virtual world power with actual might to back its authority, while others go further and claim that it is or will become an actual One World Order. Usually this is accompanied by boatloads of artistic license.

Since the creation of the United Nations (before that in fact- there were Model League of Nations simulations — which started, ironically, at Harvard, in the United States, which never joined the League), high school and university organisations have been running simulations of parts of the United Nations, generally called Model United Nations. These are designed to improve understanding of international affairs, build up public speaking skills and look good on a CV/resume.

Theoretically, at least. Most participants regard it as something fun to do: LARP in suits that you can put on your resume.