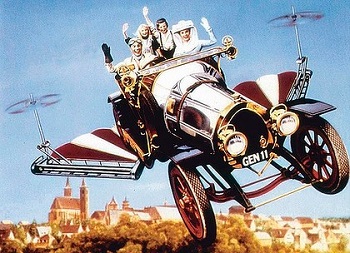 "Roads? Where we're going, we don't need roads..."
Luke: Professor, where did you learn to fly a plane?
Layton: Plane? This is an automobile.
— Professor Layton and the Unwound Future
Advertisement:

It's The Future and you want to show how far technology has advanced. Or, your present-day Earthling heroes are visiting an alien planet whose society is light years ahead of us. Or the story is set in present-day Earth and you simply want to give your hero a Cool Car, but what do you do when missiles, Nitro Boost and Ejection Seats don't suffice to show just how much of a badass he is? Simple: flying cars!

In a setting more similar to the present day, a flying car can be used to show off the credentials of a superhero or a character who's rich enough to be one of the Fiction 500. Or sometimes it's just a way to demonstrate that a show is set in a far-flung time and/or place. If flying cars are sufficiently common in the setting, they may lead to We Will All Fly in the Future—nothing screams "futuristic (or alien) city-scape" better than giant buildings with all the space between them crammed with flying shiny specks! Either way, you need a flying car!

The lack of flying cars in Real Life is a common complaint. When people think of flying cars, they generally mean a vehicle that looks, drives and behaves exactly like an automobile... except flying. Otherwise you could say we already have them in the form of helicopters and small planes. This would require some rather fanciful technology for a vehicle to get off the ground without wings or a rotor system in place. This is usually handwaved with some mention of an antigravity device. Nowadays, this trope is rarely played straight, at least not in its most literal form. The idea of flying vehicles being as common as cars in the future is still frequently used, but in modern works they're more likely to look like futuristic VTOL aircraft than actual cars that fly. It's also possible that with climate change now a primary concern, and with it the realisation that car emissions contribute a huge chunk to greenhouse gases, pollution and climate change effects, depictions of cars flying en masse may start to smack of environmental disregard, especially as less and less people today are opting to drive on-the-ground cars, in favour of taking—or demanding, if they don't have—mass public transit.

There have been some real-life attempts at combining cars and aircraft, but rather than flying cars, they're better described as "road-able aircraft," basically small planes whose wings can be folded/removed so they can be driven on normal roads. However, the idea has never gotten off the ground (pun intended) for the same reason combined baseball/football stadiums went out of style: their functional needs are so different, making something that does both only succeeds in making it lousy at both. Such vehicles are expensive, clunky to operate in either form, and not the least bit fuel-efficient. One of the more serious problems is that as they are, in the eyes of the law, both automobiles and aircraft, meaning they require both a driver's licence and a private pilot's licence to operate. Still, there are attempts to fix this problem.

See also: Look Ma, No Plane!. If the car in question is flying through the air in many small pieces due to an explosion, see External Combustion. The Amphibious Automobile is a similar concept, albeit one that is more successful in real life since it's much easier to make a car float in the water than in the air.