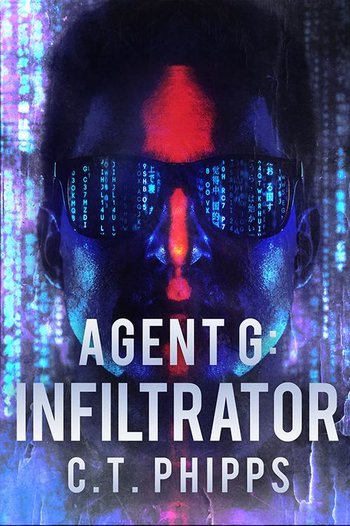 The Agent G novels are a series by C.T. Phipps. It is a Cyberpunk story set in the near-future as the present day slowly moves to become a technology ravaged dystopia starring a cybernetically enhanced assassin named G.

In a world where virtually any death can be bought for the right price, follow the path of a high-tech assassin searching for answers to questions he shouldn't be asking along with his next target. Agent G is a Letter, one of the Society's 26 weapons for hire. Unfortunately for the Society, G is starting to think for himself. Unfortunately for G, he's in the middle of infiltrating a rival organization and is running out of people he can trust.

The books follow the titular agent as he witnesses the slow transformation from a Next Sunday A.D. Spy Fiction science fiction series to a 20 Minutes in the Future Cyberpunk Dystopia. It deals with issues of Transhumanism, corporate corruption, and conspiracy theories. It is a book that crosses over in The Tournament of Supervillainy.

The first three volumes were collected as The Agent G Omnibus in December, 2020.

open/close all folders
The series as a whole
Infiltrator
Saboteur
Advertisement:
Assassin